SCUC ISD bus driver makes a difference wherever he goes

Yoan Mora spends his mornings and afternoons during the week as a bus driver for the SCUC ISD, transporting children to school and home. However, his duties go beyond a Monday through Friday schedule, as Mora is on call seven days a week at his regular job. Mora serves as lead pastor for the Primera Iglesia Cristiana, a Spanish-speaking congregation located on the West Side of San Antonio, helping provide spiritual needs to a traditionally underserved community.

One of those duties includes running a job training program out of the church building, helping residents from the low-income neighborhood learn trades, such as air conditioning repair and welding among others. “The reason I started the training program,” said Mora, “is because the community I serve has many immigrants who do not speak English, and they need job certifications to have better career opportunities.” Mora’s job training and job placement outreach will be the subject of a profile by KVDA 60, the Telemundo news affiliate in San Antonio on November 27th and 28th.

Mora, his wife and two daughters emigrated from Cuba to the United States in 2001 after acquiring refugee status because of religious persecution. The family’s journey in the United States took them first to New Jersey, before settling in Texas.

For the time being, Mora will continue to supplement his pastor’s income through his bus driving duties at SCUC ISD with the same utmost seriousness as his pastoral responsibilities, making sure each child reaches his or her destination safely. Encouraged by his faith, he hopes to continue opening doors, whether it be on a bus, or through the pulpit, leading those he serves. “I simply try to help people who come to this country, many fleeing persecution from governments that restrict freedoms,” Mora said. “The United States is a blessed nation, and it affords us great opportunities.” 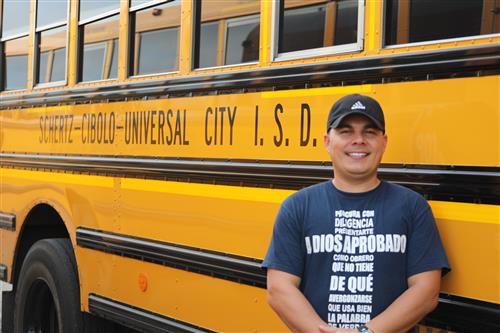