A reception to honor former Superintendent Dr. Greg Gibson was held in the board room of the William Malish Building on March 4, 2020. Dr. Gibson retired as Superintendent in January after ten-plus years as leader of the Schertz-Cibolo-Universal City Independent School District.

District employees, Board Trustees, along with city and county leaders came out to thank Dr. Gibson and his wife, Oteka, for their commitment and service to SCUC ISD.

State Senator Donna Campbell and State Representative John Kuempel were a few of the dignitaries in attendance. Campbell read a resolution thanking Dr. Gibson for his leadership that helped SCUC become, “…one of the fastest-growing districts in the San Antonio-area and in the state.” Meanwhile, Kuempel presented Dr. Gibson another proclamation thanking him for his nearly 30 years as an educator in Texas public education, as well as an American flag. 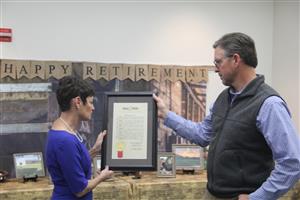 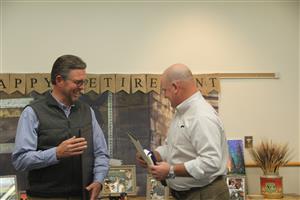