The SCUC ISD Athletic Department honored district employees who were instrumental in restoring power to Lehnhoff Stadium when the lights went out in the stadium midway through the second quarter during the Steele-Clemens game on October 15th.

Scott Lehnhoff, Director of Athletics, presented a game ball at midfield on October 18th to Steven Burnett, who serves as an electrician at SCUC. Burnett, assisted by Josh Maddox, Mel Arredondo and Kevin Gill, worked intensely to get the lights back on in approximately 25 minutes. The game ball was inscribed with, “The Night the Lights went out at Lehnhoff”.

Mr. Lehnhoff also praised the spectators present at the game for their patience and good nature during the blackout, and the bands and cheer squads from both schools for continuing to perform and keep the spirit and enthusiasm for the Battle of 3009 alive! 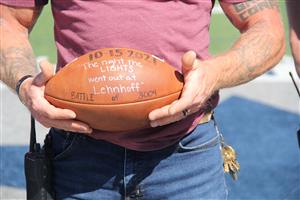